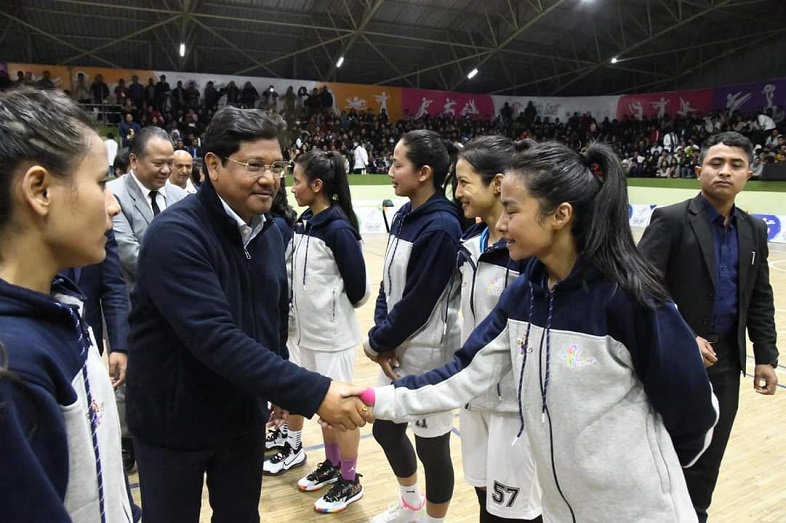 Mumbai / Shillong, November 16, 2022: CM Shri Conrad Sangma hands over medals to the winners of the North East Olympics Games. The second edition of the ongoing North East Olympic Games (NEOG) organized by the Government of Meghalaya and the North East Olympic Association (NEOA) in collaboration with the Dept. of Sports & Youth Affairs and Meghalaya Sports Olympic Association (MSOA), evokes a feeling of sheer excitement and enthusiasm amongst the athletes participating from various States of North East. It has already witnessed some brilliant performances from the athletes of Meghalaya in particular. 3000+ Elite athletes from 8 States are participating in 18 sports disciplines spreading across 12 venues in Shillong from the 10th of November till the 16th of November,2022.

On the penultimate day of this marque sporting event, there are a few disciplines where Meghalaya is strongly poised as medal contenders, out of which Meghalaya Women’s Basketball Team clinches the Silver Medal in the grand finale. Meghalaya Basketball Women’s team defeated Nagaland yesterday in the semi-final by a whopping margin of 67-18. And also as a brighter spot, CM hands over the trophy to Team Meghalaya for winning the highest medal tally in Athletics.

Speaking on the success of Basketball, CM Shri Conrad Sangma said “We are building a world-class stadium in JN Sports Complex. It was built at a cost of more than Rs.125 Crore. It would have an indoor basketball court; I will speak to the DSO to ensure the facilities are provided on priority to our young women’s team,” in response to the Meghalaya Team Coach, Cordialicia’s statement that the team has been training in NEIGRIHMS outdoor court and with Shillong’s weather, practices are frequently hampered.

Another tale of unique achievement is that of the Meghalaya Wrestling Team. This is the first time that such an event is being hosted in Shillong. In fact, there was no wrestling association in the State until one was formed earlier this year in order to host Wrestling at the Games. Eleven wrestlers from Meghalaya entered the competition- five women and six men. All of these 11 wrestlers made the jump from mixed martial arts.

Speaking on this achievement, CM said “I learned that the entire team was formed recently. All this while there was no Wrestling Federation. Our boys learned and performed exceedingly well to win medals in such a big event as NEOG. Team, I am really proud of you all. I want all of you to avail our schemes such as the new scholarship scheme for high-performing sportsmen. These will help our boys and girls to train themselves, and have the proper diet and I am sure with the talent they have; they will excel in whatever sports they take up.”

Meghalaya Wrestling Team Manager & Vice President Wrestling Association, Isaiah Kharmawphlang conveyed his thanks to the CM: “Yes Sir, we had a Mixed Martial Arts (MMA) Association but since wrestling is an Olympic event, we should try ourselves in that. We were very inspired by your speech when you said, your government will work hard to create Olympians from the State. In last year, we had seen so many opportunities – The talent Identification Program, Meghalaya Games, and now NEOG. No other Governments have ever provided these opportunities.”

Carlos Pena: Mistakes, not lack of hunger cost us the game