Carlos Pena: We didn’t give up till the last moment, but lot to learn from Kerala game 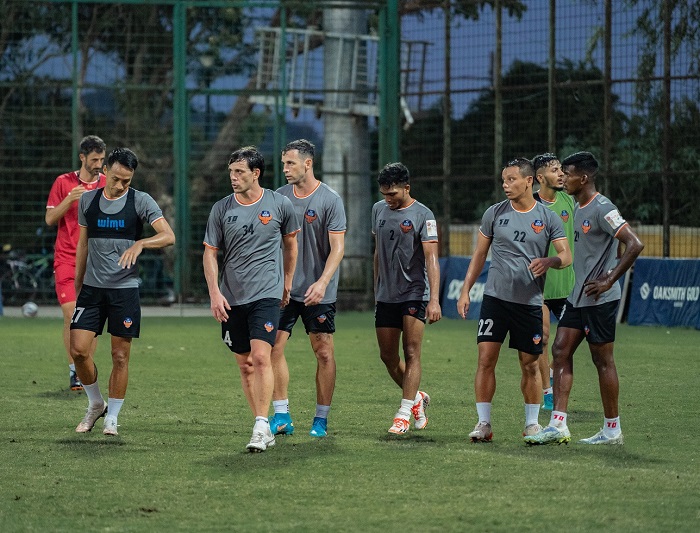 Mumbai/Goa, November 2022: FC Goa fell 3-1 to Kerala on Sunday night in Kochi after the home side ran a blitzkrieg seven minutes either side of the interval to help themselves to three goals. However, even with a mountain of 3 goals to climb in front of a raucous partisan crowd, the Gaurs refused to give up and if not some brilliant goalkeeping to combine with sloppy touches in the final third, Carlos Pena’s men could have still made a game out of it.

Speaking to fcgoa.in following the defeat, the Spaniard felt this would serve as a learning experience whilst showering praise on the his troops for the fighting spirit.

“The team didn’t give up even after going into the half 2-0, which hurt us a lot. Even at 3-0 we believed,” Pena said. “We came back strong but it wasn’t enough. But there was no doubt that the players played till the final whistle and I am happy to see the attitude of the team.

“It’s now time to learn from the game and analyse what happened. We are going to learn a lot from this, I am sure.”

Pena further illuminated on what he thought were the biggest issues with the performances and how they sought to solve them within the game.

“In the first half, we gave too many chances to hit us in transition. We knew that they are a team that can hurt us in the transition phase. We couldn’t counter-press properly. We couldn’t press them high enough on the pitch,” the FC Goa head coach added.

“In the second half, we played better as we expanded the pitch with our wingers – with Redeem and Noah playing on the two sides. That helped create chances for us.

“That’s why we took Brandon (Fernandes) off. We felt we needed more players working in the wide areas. Iker and Brandon weren’t working the best as a duo in the middle of the pitch.”

Goa’s backline has seen a lot of chopping and changing in the last couple of games with injuries proving to be a real nuisance for Pena. Last week saw Fares Arnaout get his first start in FC Goa colours against Jamshedpur after Marc Valiente had been sidelined owing to an injury. The Syrian international’s time on the pitch though was cut short on his debut thanks to an injury of his own.

It took Glan Martins’ intervention to shore up Pena’s worries last week. However, the Indian international was unavailable for this game owing to an injury he picked up last game – giving Saviour Gama his first start of the campagn. Gama lasted only 20 minutes before Sanson Pereira took his place on the field.

Giving an update on the concerns, Pena said, “Our foreign players (in defence) were not available, so couldn’t start any of them. In regards to Gama, we are awaiting test results to further evaluate his situation.”

Pena will hope to get over his injury concerns at the back as all roads now lead home for FC Goa where they are set to entertain high-flying ATK Mohun Bagan in what promises to be another Sunday Blockbuster in Fatorda.

Carlos Pena: Mistakes, not lack of hunger cost us the game