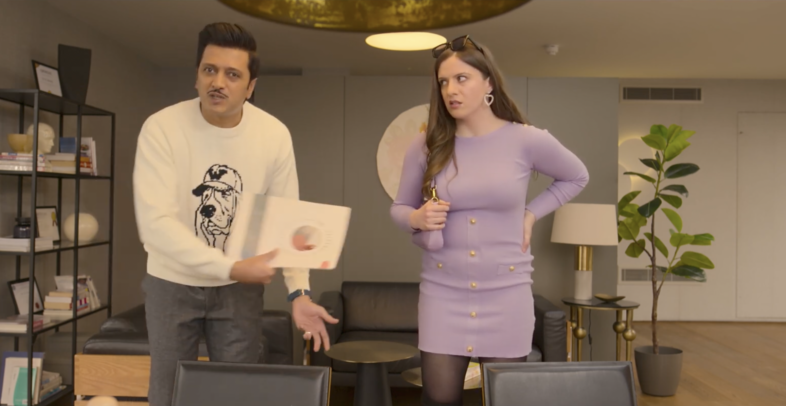 Riteish Deshmukh and Eve-Yasmine in Mister Mummy – Credit @eveyasmine
November 8th 2022, London, United Kingdom: Actress, Singer-Songwriter and Model Eve-Yasmine makes her Bollywood debut in the trailer for the upcoming comedy movie Mister Mummy with scenes opposite Riteish Deshmukh and Mahesh Manjrekar which has now hit 7.8 million views.
‘This was a dream come true for me, I have always wanted to break into Bollywood films and to have this opportunity to act alongside these legends was incredible.’ said Eve-Yasmine. ‘It was a last-minute call, I was actually stepping in for another Actress and this was my first time filming in Yorkshire. Playing a Mother was a really nice role to experience. I’m the eldest of 6 kids and whilst I’m not a mother yet, I drew inspiration from mother figures I know and also related to the character in the sense of what it means to be a young woman presented with new challenges, emotions and characters in her life.
Hailing from London, UK Eve-Yasmine first made her mark earlier this year as ‘Stella’ in the Punjabi movie ‘Main Viyah Nahi Karona Tere Naal’ alongside Gurnam Bhullar impressing viewers with her Punjabi dialogue – which she learnt in 2 days!
She has since worked on a number of South Asian films this year, in addition to dancing with Diljit Dosanjh in Honsla Rakh and appearing as Lead Female for artists’ music videos such as Vicky, Himmat Sandhu and Navaan Sandhu. Her next acting project will be working with Pushkar Jog on her first Marati movie and Eve-Yasmine’s next cameo after Mister Mummy’s release will be in Tiger Shroff’s ‘Ganapath’ releasing this December 2022.