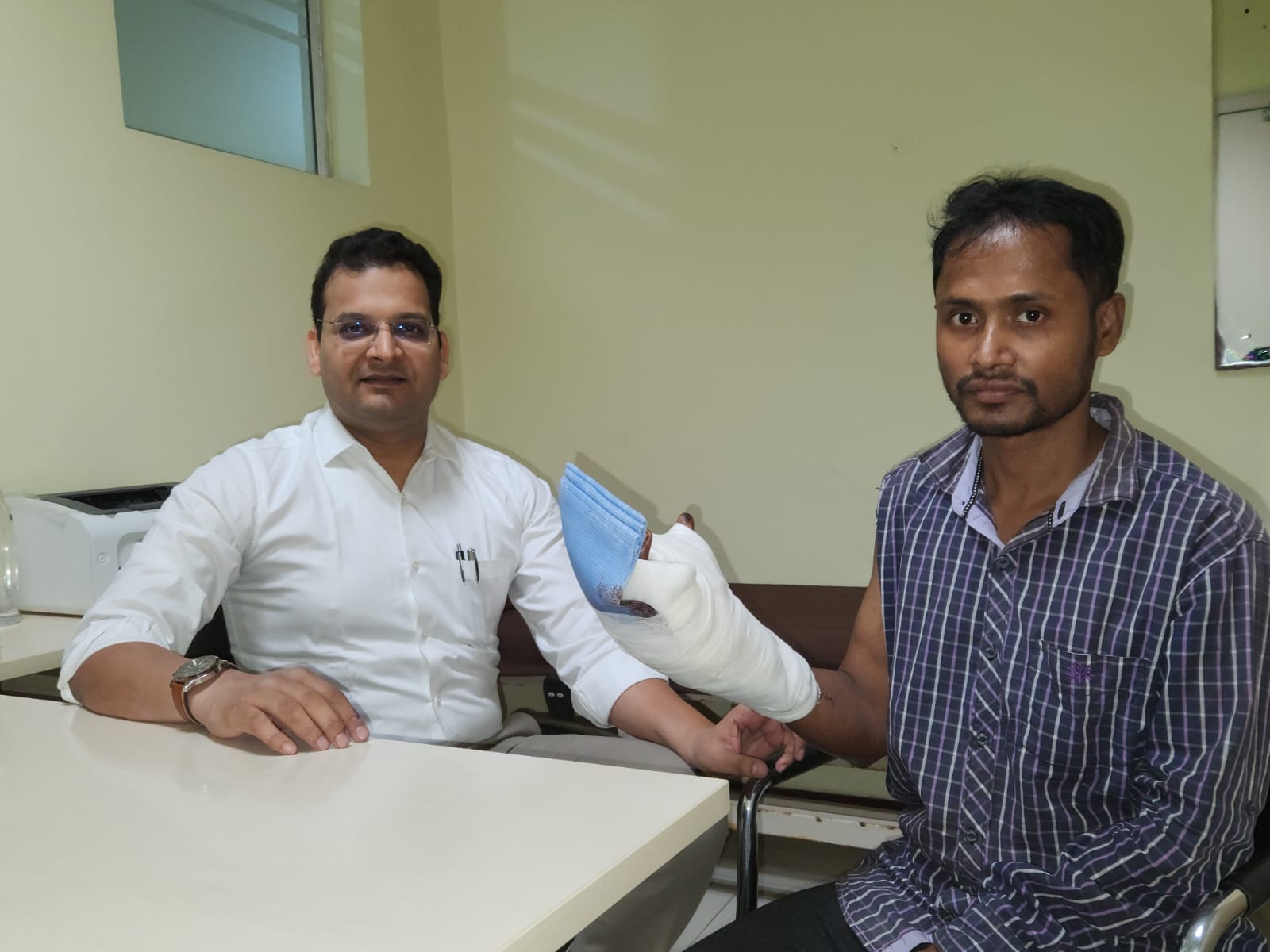 Mr. Biplab Samanta, a 24-year-old technical worker, and the only bread earner met with a severe accident on 6th November while working on a machine. In the accident, all the fingers of his right hand were amputated at different levels. After the incident, he was taken to several nearby hospitals where he was informed that to prevent infection, his hand would have to be amputated at the wrist. It was not an easy choice to amputate his hand at the wrist level, that too for a technical worker who was the family’s only wage earner. To save his hand, he was brought to Medica emergency on the same day around 5 pm. He was screaming in pain & despite knowing the fact that his hand might be amputated at wrist level, he kept on thinking & worrying about the hospital fees & surgery cost. After examining his condition, his family was provided guidance on the possibility of reimplantation and its potential effects. They were also informed about the difficulty in reimplantation of the fingers as the parts were crushed at different levels.

The family was in a state of trauma, and they were extremely worried about the cost that will be incurred for the surgery & the entire treatment. They had no clue where to get the funds, and neither did they have a health insurance card that would have provided them access to some benefits. While the family repeatedly kept thinking about the entire situation, the clinicians kept losing their precious time to save the hand of the patient. At this point, the clinical staff and management of the hospital sat down to discuss all possible ways to help the family and save the young worker’s hand because losing a hand from wrist level will have a lifelong impact not just on the young man but also on his dependent family members. Medica reviewed their economic background & on humanitarian grounds, funds from Eastern India Healthcare Foundation (EIHF) & MCKS Trust Fund, Bangalore were raised & the patient’s entire cost was waived off by the hospital.

At 7 p.m. on the evening of 6th December, the surgery was done by Dr. Akhilesh K. Agarwal, Senior Consultant Plastic & Reconstructive Surgeon, Department of Plastic Surgery, Medica Superspecialty Hospital. The surgery was complex because the structures of all five fingers had to be reconstructed. Steel wires were used to fix all the finger bones, and eventually, the tendons (a fibrous connective tissue that attaches muscle to bone) were repaired. Blood vessels with a caliber of less than 1 mm were reattached under the microscope while taking care to maintain the patency of the lumen (a hollow passageway through which blood flows). Following surgery, the patient was monitored closely by Dr. Agarwal and Dr. Aviral Roy, Consultant-Intensivists, Internal Medicine & Critical Care, Medica Superspecialty Hospital. It was critical to take extra care to identify any potential vascular compromise so that action could be taken immediately to keep the circulation going.

Dr.Akhilesh Kumar Agarwal, who led the operation, said, “When he was brought to Medica for hospitalisation, he was in excruciating pain, and the reimplantation was urgently needed. So far, the recovery has been effective, but he will eventually require some corrective surgeries to fully recover, at which point all his fingers will be able to function and he will be able to carry out all his duties as required. Undoubtedly, this is a remarkable case that I have recently encountered. I send Mr. Samanta and his family my best wishes for a happy and healthy future.” He further added, “Although I am quite pleased with the results of this case, what makes me even happier are the smiling faces and sighs of relief on their faces when the expense was waived. It is our responsibility as healthcare providers to save a person’s life before considering any other concerns. Thus, on humanitarian grounds, we made the decision to not charge for this surgery.”

Dr. Alok Roy, Chairman, Medica Group of Hospitals, averred, “Regardless of one’s financial condition, religion, gender, nationality, etc., we are here to serve, and we are incredibly grateful to have done so. Even though every surgery has its own risks and complexities, it gives a doctor great pleasure when it is successful; & this is one such surgery. In the future, we hope to be able to save a growing number of lives and work to support everyone, irrespective of their economic condition.”

The patient was discharged with a very satisfying post-operative evaluation after 8 days of the surgery and is slowly getting back to his normal life.

The entire surgical procedure not only assisted Mr. Samanta in reviving his right hand but also helped him from completely losing his job. Having set benchmarks in patient care, Medica Superspecialty Hospital, which has a world-class comprehensive surgery department at the Kolkata facility and is widely known for its excellence in every department has now added another feather to its cap, after successfully treating a critical Plastic Surgery patient from Kolkata.

Skin and Hair challenges during winter