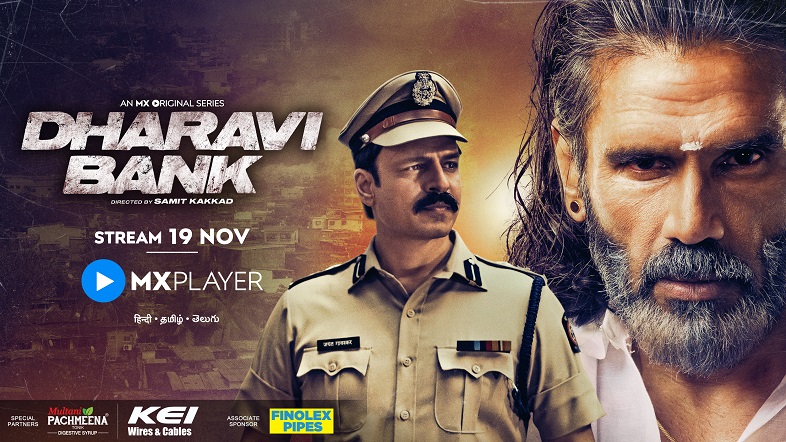 Mumbai, 8 November 2022: An unending stretch of narrow dirty lanes, open sewers, and cramped huts – a place that more than a million people call home, Dharavi is deep enough to shelter a sea of secrets. Opening a window to one such power-packed story from the gullies of this cluttered maze is MX Original Series – Dharavi Bank. Highlighting the clash of two worthy adversaries in a thrilling chase, all episodes of this gripping thriller will stream on MX Player, from 19th November onwards.

Suniel Shetty, who marks his digital debut with this show, will be seen as Thalaivan – the unattainable kingpin of Dharavi Bank. Determined to take this empire down is JCP Jayant Gavaskar, played by the versatile Vivek Anand Oberoi. The trailer gives us glimpses of a vast crime nexus operating within the walls of Dharavi and a thrilling chase to finding an unimaginable financial empire worth Rs 30,000 Crores hidden in those 30,000 lanes. For each of them, this is a fight for family, honor, power, and for duty – but who will have the last say?

Speaking about essaying Thalaivan, Suniel Shetty said, “I believe respect must be earned and Thalaivan is the perfect embodiment of how this is done. He is powerful, and ruthless and is also the most giving to those he considers his family, the people of Dharavi. His mantra, ‘Mere family ko touch Nahi Karne kaa’ really resonates with me as a person as well. Through the making of the show, I realized how OTT allows you to really deep dive into your character and Thalaivan made for the perfect digital debut for me.”

Speaking about why he agreed to play this badass cop, Vivek Anand Oberoi added, “Dharavi Bank is a complex story that goes beyond just bringing down a crime empire. It shows how far one can go for family, for one’s duty, and tests one’s morality. Playing JCP Jayant Gavaskar needed me to find that right balance because he journeys from being the ideal cop to being manipulative, he patiently bides his time like a tiger on the hunt and believes that the end justifies the means – that stood out for me since the lines were so blurred and this character was so fascinatingly layered for this unconventional cop.”