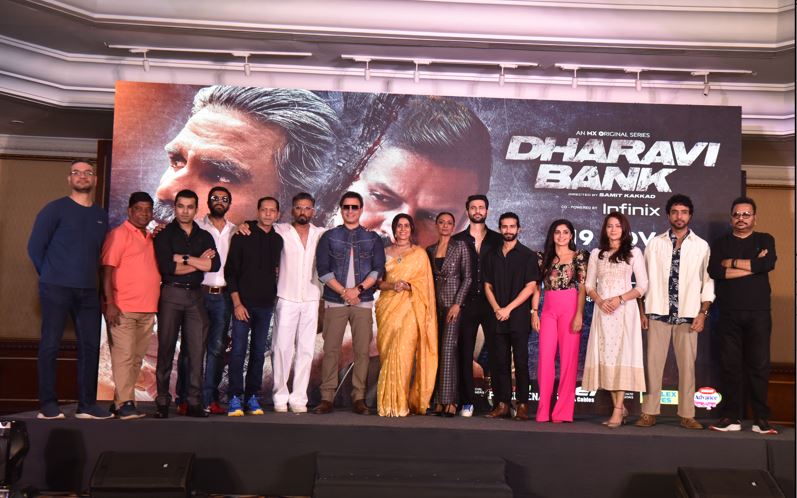 18 November 2022, Mumbai, India: India’s entertainment Super App, MX Player has been enthralling viewers with a dynamic array of storylines across formats, genres, and languages. Amping up its robust library of original series, MX Player is all set to entice viewers with the launch of the high-octane crime thriller ‘Dharavi Bank’. Directed by Samit Kakkad, this 10-episodic series sees Suniel Shetty make his digital debut as the ruthless and unattainable Thalaivan who is hunted by tough cop JCP Jayant Gavaskar portrayed by Vivek Anand Oberoi. Dharavi Bank will stream from 19th November 2022 on MX Player.

Bringing alive the unending stretch of narrow dirty lanes, open sewers and cramped huts of Dharavi in an intense chase, the show narrates the story of a cop trying to topple over a powerful gangster, who is the de facto government in Mumbai. Highlighting how far one can do for one’s family and duty towards the nation, Dharavi Bank is a complex story that goes beyond just bringing down a crime empire. With good amounts of action, emotion, and mayhem, for each of them, this is a fight for family, for honor, for power, and for duty – but who will have the last say?”

On the launch of this web series, Gautam Talwar – Chief Content Officer at MX Player, said, “We’ve associated with some of the finest talents in the industry to bring alive this complicated tale from the maze that Dharavi is. Marking Suniel Shetty’s debut in a negative role and Vivek Anand Oberoi essaying a cop with gray shades, this series is supported by an ensemble of power-packed performers with each actor adding their own shade to this unconventional thriller. At MX Player, it has been our constant endeavor to narrate stories that are compelling and we strive to create meaningful content for audiences. With our recent originals like Aashram, Matsya Kaand and Campus Diaries – our content has successfully created resonance while truly reflecting our audiences’ viewing habits.”

Director Samit Kakkad further added saying, “This is my second association with MX Player after Indori Ishq and I truly believe that we’ve pulled out all the stops to make this crime thriller an interesting watch. I can’t think of another metropolis that feels, looks, smells and emotionally sucks you in the way Mumbai does. I am a Matunga boy and I’ve grown up in the vicinity of Dharavi so it was important for me to portray its lesser-known world aesthetically to our audiences. There’s so much more to Dharavi than its winding bylanes and there’s so much more than meets the eye for each of our characters in this gripping narrative.”

On playing Thalaivan – Suniel Shetty further added saying, “This time around, it’s all about the technicians and the talent, it is a fact that everyone has been involved in this completely and I’m super excited. I thought I was Thalaivan the minute they narrated it to me, and somewhere down the line, I got the confidence that after a break of so many years, I can go back to school. I probably haven’t forgotten my craft. More so, Dharavi as a backdrop makes you feel you are back in India and that is the beauty of the show.”

In the chase of Thalaivan and breaking his crime nexus is the atypical cop JCP Jayant Gavaskar essayed by Vivek Anand Oberoi. Speaking about his role, Vivek said, “Jayant Gavaskar is a cop whose intentions when it comes to meting out justice are honest. However, he will use any means to get to his end. For me, it was interesting to delve into this aspect which I got to live for the entire duration of the show. Purely black and white characters can often prove to be one-dimensional. But here was a cop who has his eye on the goal, which was to ensure that justice is done at any cost, even if it means that the methods he uses are questionable or even manipulative. These layers and shades had me intrigued and hooked. I have portrayed him with a simmering intensity. One doesn’t know what he is planning. It was extremely exhausting but also rewarding to dig into the psyche and mind of such a character.”

Sonali Kulkarni plays the sharp and shrewd Chief Minister Janvi Surve and speaking about essaying this politician on screen, she said, “My personality has always been pleasant, fun-loving and honest types.. so it was quite a challenge to be playing Janvi Surve – an egoistic, hard-hearted and calculating woman who is so diametrically opposite to my nature. I enjoy such parts that test my versatility as an actor.”