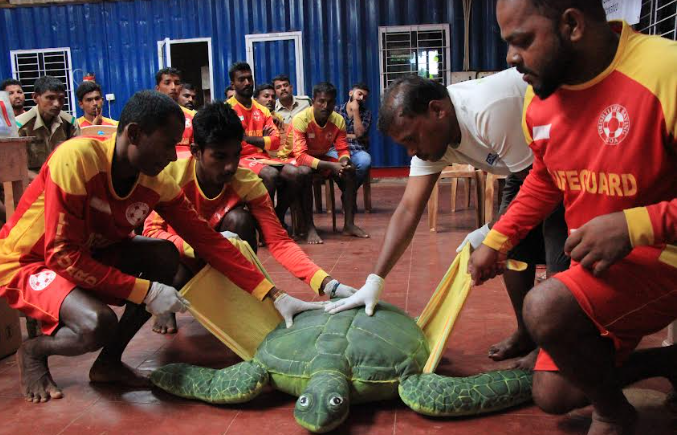 Drishti Marine has taken the initiative to refocus the meaning of the term lifeguard for the general public by proposing the term lifesaver instead of lifeguard.

“The programme conducted for the lifesaving team over a period of two days is based on global standard procedures in rescue and handling of marine wildlife and carcasses. In addition to being educated in internationally recognised first response methods for dealing with stranded marine species that washes up on beaches, identification of different forms of marine creatures as well as their movement patterns are part of the training, “explained Navin Awasthi Operations Head at Drishti Marine.

This initiative is in response to the evident effects of climate change and increased human activity, which has resulted in an increasing number of marine mammals washing up on coastlines. Researchers from the Wildlife Institute of India (WII), the Wildlife Conservation Society-India, and the National Oceanic and Atmospheric Administration (USA) conducted a study to better understand stranding events on the Indian coast and identify hotspots. The research team gathered data on strandings from publications, open access databases, and reports spanning an impressive 270 years. They discovered an increase in stranding events in recent years, particularly between 2015 and 2017. From the compiled dataset, the research team classified the 1674 records they found into five categories – sightings (660), induced deaths or hunting (59), accidental deaths (240), and live or dead strandings (632), and unknown (83).

“This annual refresher training is based on an initiative established by Goa Forest Department in 2017 in collaboration with IUCN-India & local social enterprise Terra Conscious to create a state-wide Marine Wildlife Stranding Response & Monitoring Network in Goa. The initial trainings for the lifesavers were conducted by subject experts with support provided by IUCN-India. Since then, the network has grown over the past 5 years to include annual refresher trainings; coordinating support provided by Drishti Marine Foundation. The Foundation also consults with species experts as well as veterinarians, to provide guidance for timely response and support to the State Forest Department.” said Puja Mitra, Network Coordinator – Drishti Marine Foundation & Founder, Terra Conscious.

Terra Conscious was founded in February 2017, an education based social enterprise for conservation, headquartered in the state of Goa, focuses on Marine & Coastal conservation through impact programmes and learning programmes.

For the past several years, Drishti’s lifesavers who patrol Goa’s 105 km coastline are first responders to water – based rescues and medical emergencies and incidents that require human intervention. Additionally, the force has taken on the responsibility of marine wildlife rescue and handling on the shoreline from 2017 onwards. This provides the necessary support to the State Forest Department.

Detailing the marine wildlife training modules, Santano Fernandes, Training Instructor, Drishti Marine added “The lifesavers have been trained in assigning codes that define whether the animal is alive and needs treatment or if it washes ashore dead, then to ascertain at what stage of decomposition it has reached. They have also been trained to take photographs and measurement of the carcass which can help identify the species, age, and gender of the marine animal. Furthermore, they are trained on how to safely lift, transport and handle sea turtles, marine mammals, and seabirds.”

Tips to be followed by lifesavers if the animal is alive

ONLY under veterinary supervision